Scientifically substantiated heated tobacco products heat tobacco instead of burning it, resulting in the production of lower levels of harmful and potentially harmful constituents (HPHCs). For THS, the levels of HPHCs in the aerosol are reduced on average by 90-95% compared to those found in the smoke of a 3R4F cigarette designed for scientific research. Those measurements focused on lists of constituents by health authorities such as the World Health Organization (9 chemicals on priority list), the U.S. Food and Drug Administration (18 chemicals excluding nicotine), and the Agency for Research on Cancer (12 group 1 carcinogens). In more recent research, described here, we expanded our focus with the aim of identifying all the chemicals present in the THS aerosol, both known and unknown, using a suite of untargeted analytical methods. Thanks to this approach, close to 100% of the chemicals present in THS aerosol at a level of 100 ng/stick or above have been identified.

We generated cigarette smoke from the reference cigarette 3R4F and aerosol from THS using a linear smoking machine, according to the Health Canada intense smoking regimen. The smoke/aerosol samples were collected and prepared using simple processes that could be completed quickly, in order to minimize the opportunity for chemical reactions to occur after sample collection. The particulate phase was collected by passing the smoke or aerosol through a Cambridge (glass fiber) filter pad. The gas-vapor phase passing through the filter pad was trapped by using a series of two micro-impingers containing solvents, which were cooled to below room temperature. 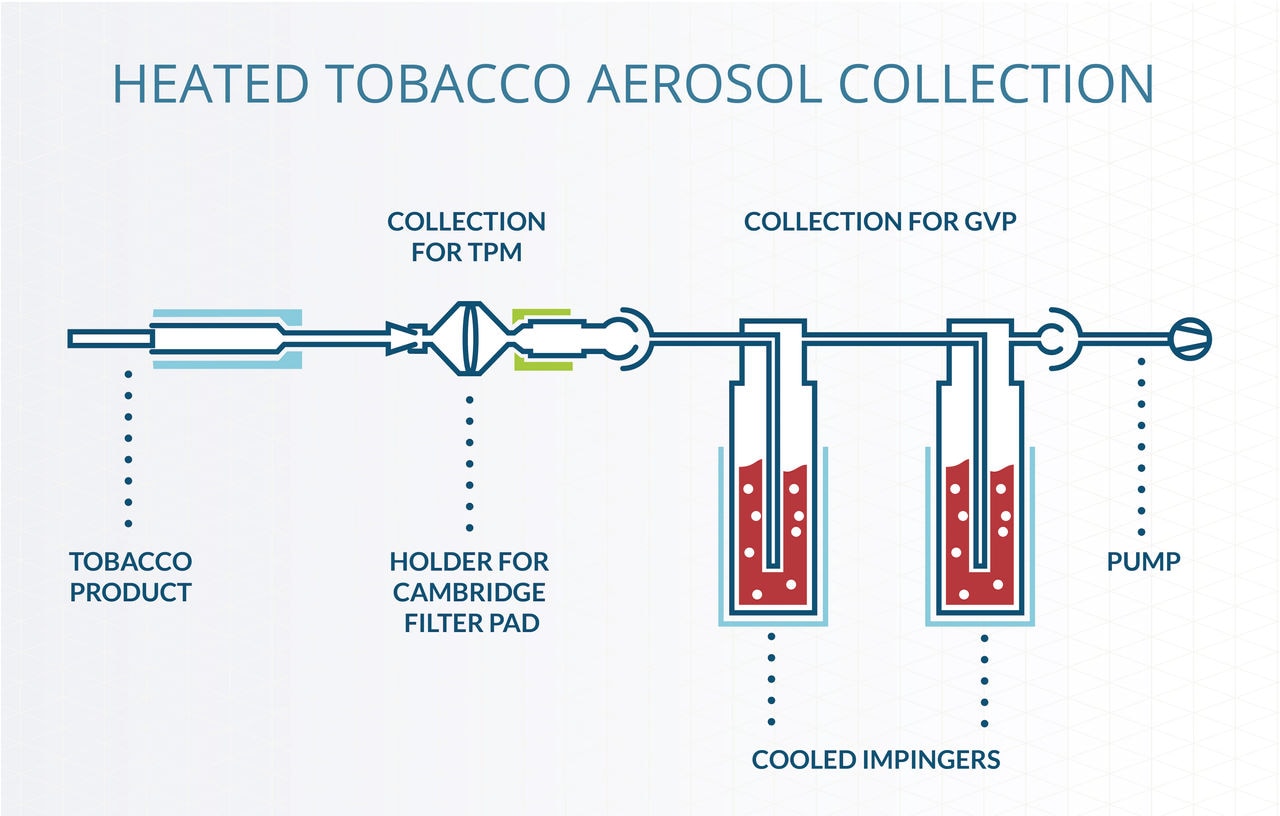 We used untargeted screening in order to maximize the number of chemical constituents detected in the aerosol. An untargeted analysis looks for any chemicals present in the sample, both known and unknown, thereby maximizing the number detected. In contrast, using targeted analysis, scientists look for certain known chemicals only, and, as a result, do not measure other chemicals present in the samples. We developed and used several overlapping analytical methods, using both gas and liquid chromatography, to cover as many chemicals as possible in the chemical space related to heated tobacco aerosol and cigarette smoke. Liquid chromatography with high-resolution mass spectrometry methods were used to detect highly polar compounds, and two-dimensional gas chromatography with time-of-flight mass spectrometry methods were used to additionally detect volatile and non-polar compounds. 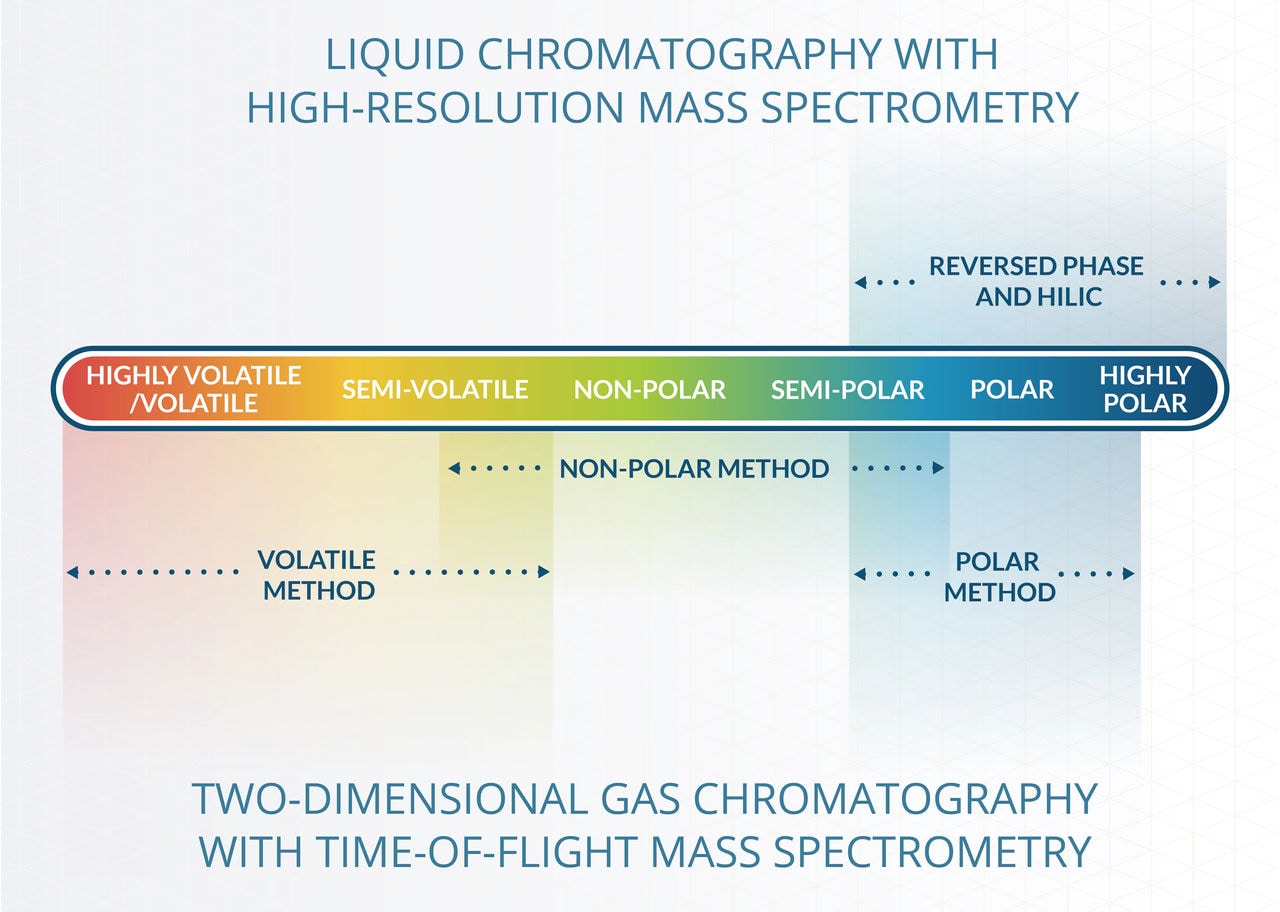 Illustration of the suite of untargeted methods used to cover the anticipated chemical space for tobacco smoke and aerosol. HILIC stands for hydrophilic interaction liquid chromatography.

Using these methods, we expect that only a small minority of constituents have been overlooked, such as highly reactive short-lived compounds. For example, these methods did not detect formaldehyde, a highly reactive carbonyl known to be present in both cigarette smoke and heated tobacco aerosol.

We reported substances present at or above 100 ng per cigarette or tobacco stick. This reporting threshold was chosen as a compromise between the number of compounds identified, and the overall effort required for their identification. Since it is known that the number of compounds increases exponentially as their concentrations decrease, the effort required to identify a significantly increased number of compounds using a threshold below 100 ng/stick was not feasible. In addition, we have estimated that by applying a reporting threshold at 100 ng/stick, less than 1% of the total mass determined by untargeted screening has been overlooked.

A total of 529 compounds with concentrations ≥ 100 ng/stick were identified in the THS aerosol by untargeted screening and were estimated to constitute close to 100% of the total determined aerosol mass. Water, nicotine, and glycerin, which are highly abundant in the THS aerosol, were determined using separate targeted measurements and were not considered during the untargeted screening process. 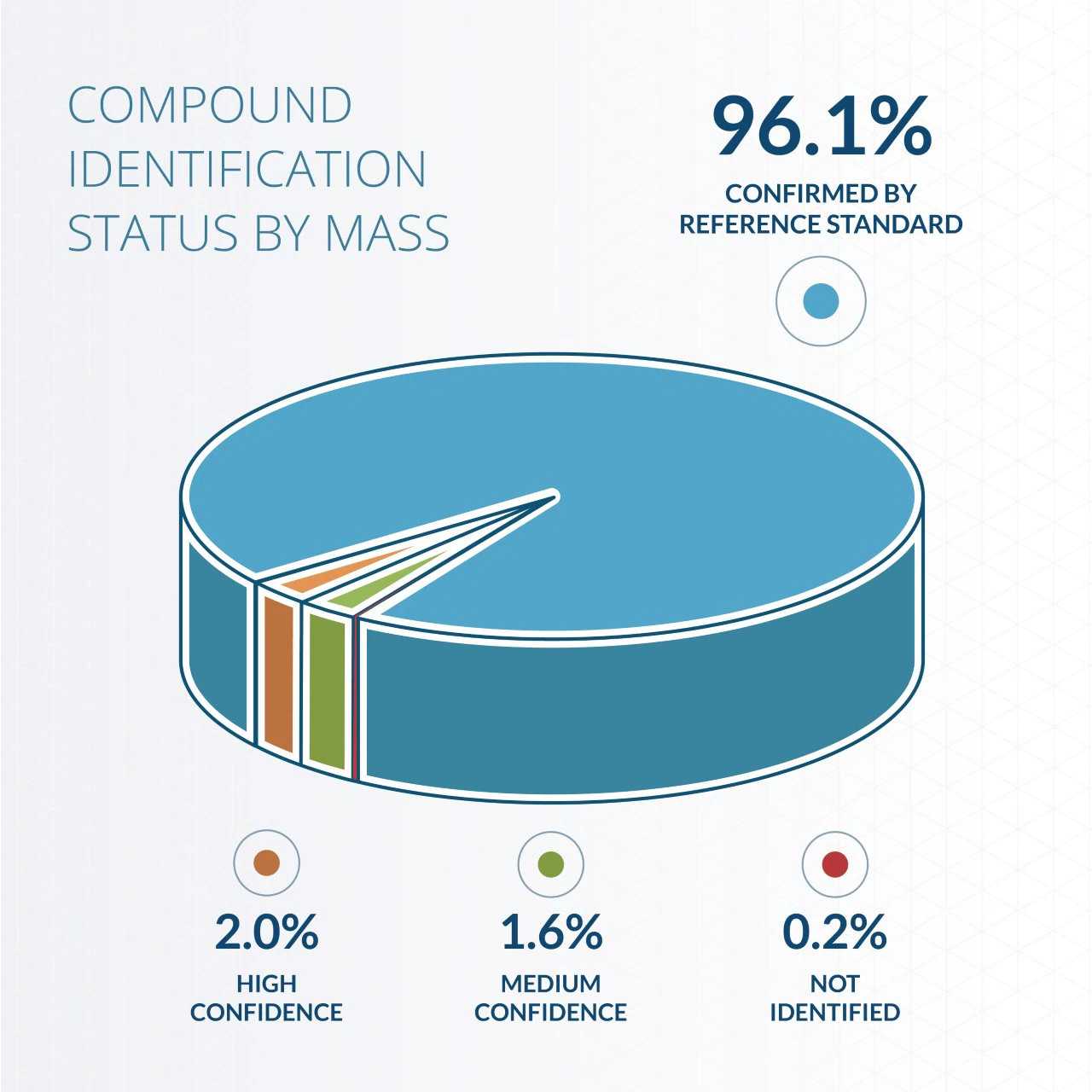 Among the compounds present in the aerosol produced by THS, the identity of more than 96% of the compounds by mass were confirmed using reference standards.

Of the 529 compounds, 363 (68.6%) were found only in the particulate phase, and 127 (24.0%) were found only in the gas-vapor phase. Further, 39 (7.4%) compounds were present in both the particulate and gas-vapor phases. Although we did not fully characterize the composition of 3R4F reference cigarette smoke, we have estimated that there are 10-fold fewer chemical constituents present in THS aerosol and can confirm that these 529 compounds are also part of the 6,000+ compounds known to be present in cigarette smoke. 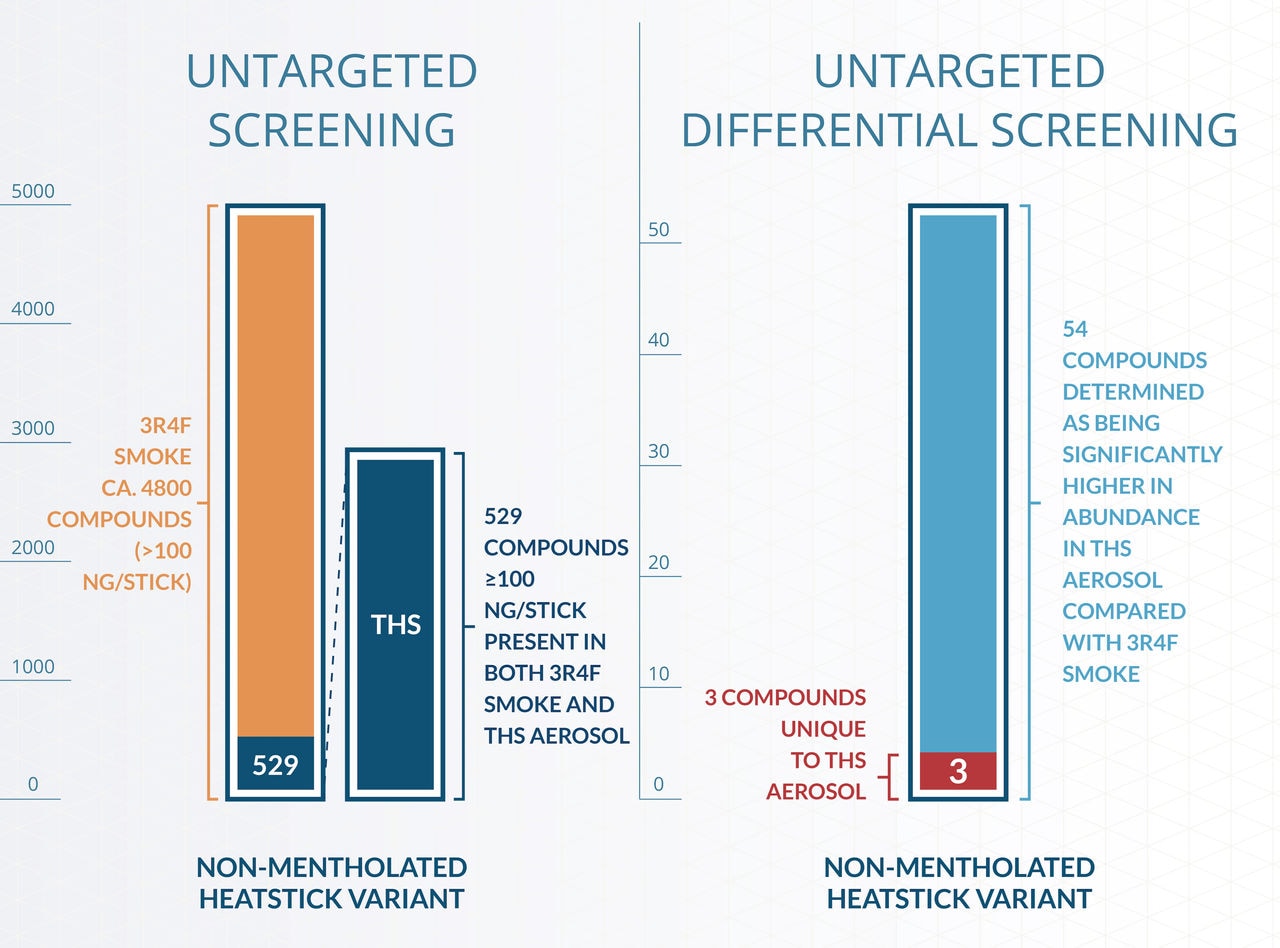 By reporting only compounds at concentrations above 100 ng/stick, it is possible to overlook compounds that might represent a toxicological concern at concentrations below this threshold. We previously used the same methods reported in this publication for a differential screening approach, which does not apply a concentration reporting threshold. In that case, differential screening refers to the identification of compounds that are more abundant in THS aerosol, compared to cigarette smoke. The study identified three compounds lower than 100 ng/stick that were unique to the non-mentholated THS aerosol (cis-sesquisabinene hydrate at 61 ng/stick; ethyl dodecanoate at 23 ng/stick; and benzenemethanol, 4-hydroxy at 11 ng/stick).  These compounds, along with those found to be more abundant in THS aerosol than cigarette smoke, were submitted to toxicological evaluation. Read the paper for more information on untargeted characterization of the aerosol of the two mentholated versions of THS that were also assessed in this study.

Four compounds that were not present in any list of priority toxicants were highlighted to be of toxicological concern, namely glycidol, 3-monochloropropane-1,2-diol (3-MCPD), 2-furanmethanol, and furfural; however, the levels of these chemicals present in the aerosol were below the level of concern. Notably, the U.S. Food and Drug Administration assessed these findings and stated that “Although some of the chemicals are genotoxic or cytotoxic, these chemicals are present in very low levels and potential effects are outweighed by the substantial decrease in the number and levels of HPHCs found in combusted cigarettes”.

In this study, we reported the first comprehensive chemical characterization of the aerosol composition of our heated tobacco product, THS. Our results show that the current lists of priority toxicants are also applicable to the assessment of heated tobacco products. We found that some compounds were more abundant in, or were specific to, the heated tobacco product aerosol. These compounds could be included in specific lists for such products. However, their presence at such low levels should be evaluated in the context of the overall reduction in chemical constituents, including known harmful and potentially harmful constituents. 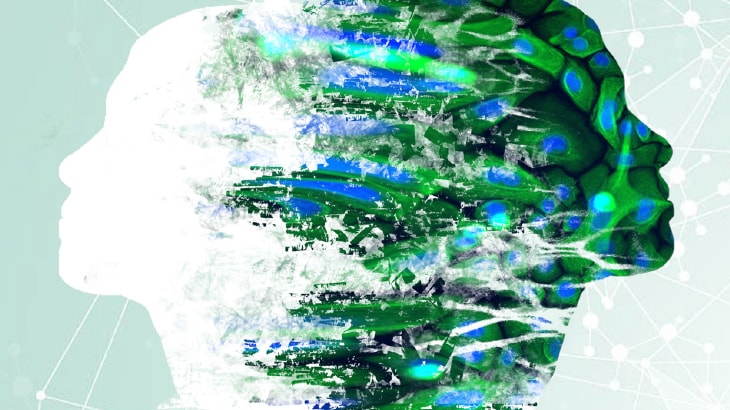 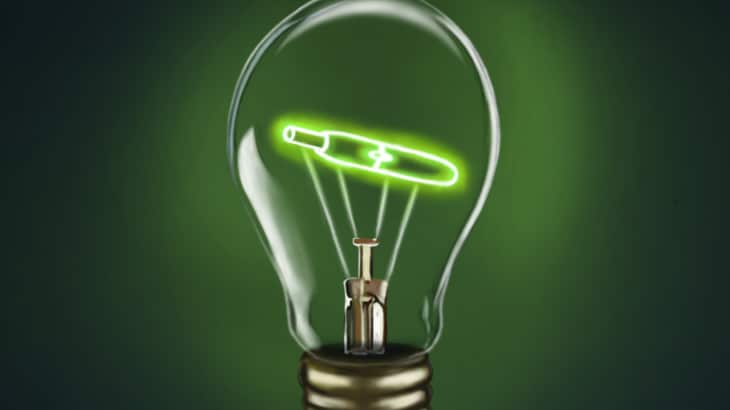