The Neutral Red Assay and assessment of Reduced-Risk Products

The Neutral Red Assay is probably the most widely used assay for the assessment of cytotoxicity in the context of tobacco product testing.

Neutral red is a dye that is taken up by a specific type of mouse embryo cells (BALB/c 3T3 cells) where it accumulates in the lysosomes / endosomes. We can test the cytotoxicity of a compound by applying the dye to cells, washing away any that remains on their exterior and then measuring the amount of dye that is extracted from within the cells’ lysosomes. The more dye that is recovered from a cell, the less cytotoxic the substance that the cell was exposed to.

The Neutral Red Uptake (NRU) in vitro cytotoxicity assay developed by Borenfreund and coworkers[1] has been widely used and accepted as a screening method to determine the cytotoxicity of compounds[2]. The test is known to be responsive to both the total particulate matter (TPM) and the gas-vapour phase (GVP) of cigarette smoke[3] and it can discriminate between different cigarette tobacco types[4]. Cytotoxicity is determined in the NRU assay according to the INVITTOX protocol No. 3a. 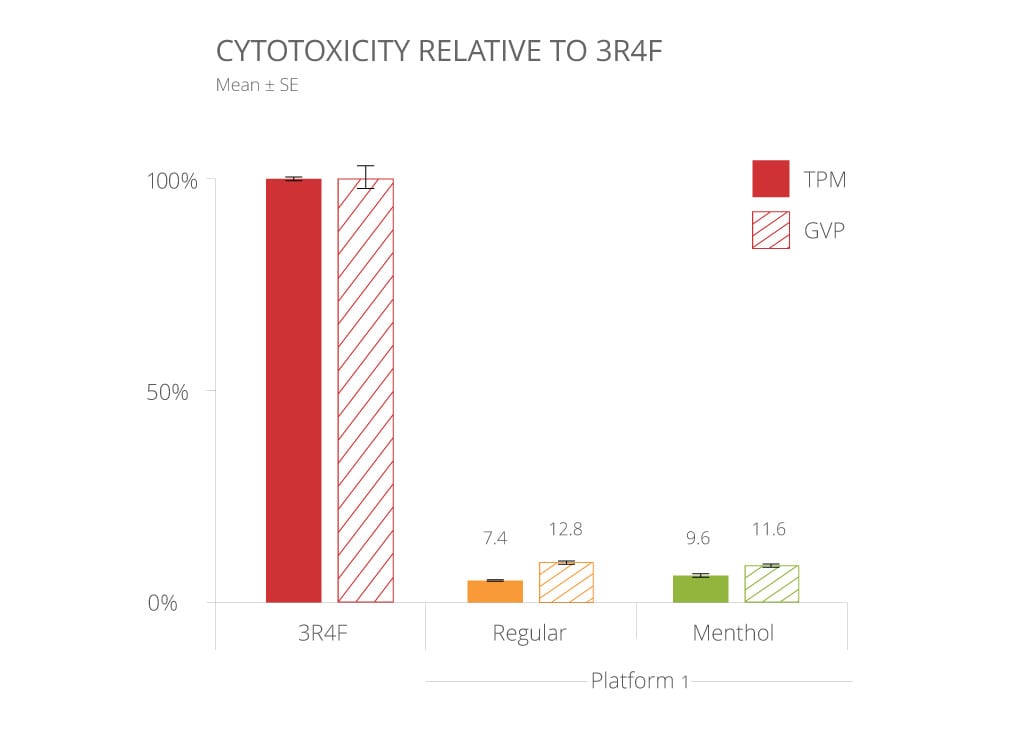 Note: these data alone do not imply or represent a claim of reduced exposure or reduced risk.

The results show that for both the TPM and GVP, cytotoxicity was significantly lower in the cells exposed to Platform 1 than 3R4F. Further, there was little difference in the cytotoxicity potential between menthol and regular versions of Platform 1.

[2] National Institute of Health. Report of the international workshop on in vitro methods for assessing acute systemic toxicity. 2001. Available online at: https://ntp.niehs.nih.gov/iccvam/docs/acutetox_docs/finalrpt/finalall0801.pdf